I’ve finding the simple things in life are what I’m holding on to these days.

This piece of beautiful art made by my youngest makes my heart very happy today and will be cherished forever.

He is Risen and through Him we have eternal life! I am so grateful for the love He shows me minute by minute and the hope He gives me in this broken life. I am extremely grateful for Heaven too!

Have a beautiful and blessed Easter!

Anna was two years old when President Obama took office. I remember sitting watching the inauguration with her thinking that she would grow up with Obama as her president. I was pleased with this fact because I knew he was good man, good father and was someone who was going to run our country with integrity.  I also was proud to know that with my vote, along with many others in our country, the first African-American president was elected.

I’m sure, like many, I was emotional watching his very first speech that day and found myself chanting, “yes we can” and dancing around the room with Anna. I knew in my heart that positive change was on the horizon for our country and it felt so good.

A couple of months later, after spending a day with her dad, Anna returned home with a new baby under her arm. Her granny had found it for her and Anna was smitten with her new addition. We sat that afternoon talking about her little one and, as I did with all of her dolls, I asked her what her baby’s name was.

She looked at me with proud mama eyes and then shouted, “Baby Obama.”

I smiled, gave little Baby Obama a kiss on the forehead and welcomed him into our family.

I have an unsettling feeling in my gut this week. You know, the one you get when something really good is about to end. I’m not going claim that I know everything about politics or that every decision President Obama made while in office was perfect, he wouldn’t even claim that.  What I will say is, as a mother, I am proud that Barack Obama was my daughter’s president, a man who did lead our country with integrity.  This statement holds a lot a weight in my heart because he is the only president she ever knew.

On Friday night I think I may hold onto Baby Obama and his Aunt Alice for a while and daydream about the day Anna and I danced around our family room singing “yes we can.”  So mI will also continue to believe in the power of love and hold onto the hope that President Obama talked so eloquently about last week during his last speech to our nation.

President Obama was not only Anna’s president but he was mine and he and his wife will forever be role models for me as a parent and as an American.

I’m praying for our country and it’s leadership. 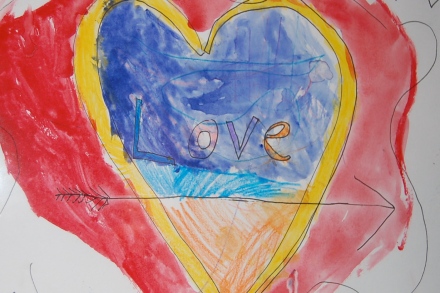 We have lots of love in our house and in our lives so of course we love Valentine’s Day. I would spend the 13 days leading up to it giving little love notes to Anna and Abigail, making heart-shaped cookies and sandwiches for their lunches and planning what we were going to spread love on the big day. I loved watching my girls create notes for their friends, Abigail loved to bake heart-shaped cookies and Anna loved to decorate them. We did these sorts of thing throughout the year but during the days leading up to Valentine’s Day we created a tradition to really focus on love we have for one another. 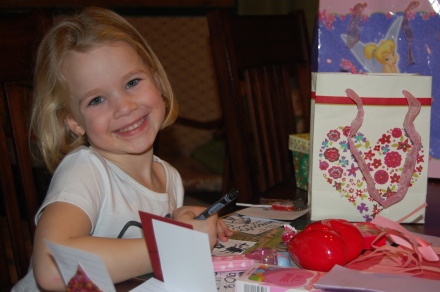 Last year I started putting little heart love notes in their rooms early in the morning before they woke up. Abigail’s were placed on the mirror in her bathroom, or on her dresser where her favorite bracelet’s were placed; I knew she would be putting them on in the morning before school. Anna’s were in her closet to be found when she was getting dressed or on the floor just as she stepped down for the first time each morning. I loved making these little notes and I loved that both girls would come downstairs with a smile and a hug knowing just how much their Mama loved them.

These notes are still displayed in their rooms by my girls. Anna’s placed in the various picture frames around her room and Abigail’s hanging on her magnetic board. I love that they were so special to them they displayed them.

I too have lots of little love notes displayed by my girls. Abigail used to leave me sticky notes expressing her love and Anna, at least a couple of times a week, would make sure to tuck a note into my bed to be found once she was in dreamland.

I love that these little gestures are still very much a part of our decor and I can’t imagine that ever changing. I can go into any room in our house and find a note left by my girls, always making my heart fill with joy for the love we all share.

Yesterday, February 1st, I would have snuck upstairs while the girls were sleeping and placed my notes in their spots. Instead I walked to the place they went to Heaven, tucked my note on their tree and told them how much I love them. I know they can feel the love in my heart, I know they know I love them to the moon and back and now to Heaven and back. 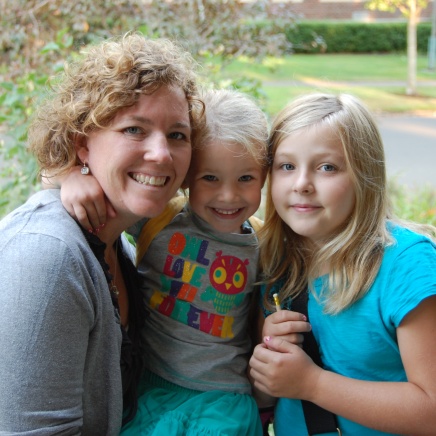